As an Amazon Associate I earn from qualifying purchases.

What is Tattoo Wrapping?

Tattoo wrapping is a process that protects new tattoos from harmful viruses, bacteria, and other germs, and the process will continue until new skin is created.

After drawing new tattoos, tattoo wrapping is done to stop the bleeding quickly.

A gauze yard is made of cotton fiber through which air can circulate, and new tattoos can breathe easily. The best thing about a gauze bandage is that it can absorb plasma, tattoo ink, and flowing blood very quickly, causing the tattoo to dry out very quickly. But the downside of gauze wrapping is that it sticks tightly to the skin. In new tattoos, it is challenging to remove the bandage as it is stuck to the skin. A good solution is to soak the gauze cloth in lukewarm water for a few minutes until it is loose and gently remove it.

Why Are Tattoos Wrapped?

According to certain laws, tattoo bandages are essential in most countries to protect tattoos from infectious diseases. The main purpose of tattoo wrapping is to protect the tattoo from any external germs and infectious and plastic film wrapping to prevent any unwanted blood or stains on the body. Who wants the blood of his body to stick to the bed-pillow or clothing? Getting out with blood clots is as dangerous as it is unhealthy. This is why tattoo artists wrap tattoos as soon as they draw a new tattoo. In this way, just as your tattoo is protected, other people will be safe from your blood and blood-borne germs.

Why Is It So Important to Use Gauze Bandage Wrapping As Tattoo Wrapping?

You can make your tattoo more secure if you want. You can use polyurethane-acrylic adhesive medical-grade bandages like Saniderm tattoo bandages or Dermshield to wrap new tattoos. These adhesive medical-grade bandages will serve as your second skin. These bandages keep dirt and germs away and create a perfect environment for your tattoo to heal faster. Another great feature of these bandages is that they increase the brightness of your tattoo color, i.e., make the color of your tattoo darker. Saniderm tattoo bandage is currently widely used as a tattoo healing bandage. This curable bandage can halve the healing of your tattoos. We always recommend professional tattoo artists use the saniderm bandage as it is environmentally friendly, waterproof, breathable, and able to give a brighter color. 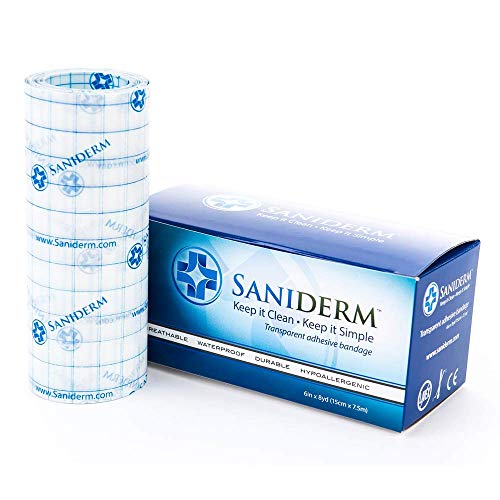 see it on amazon

How Are Tattoos Wrapped?

There are several types of tattoo wrapping that we will now discuss in detail:

Step 1: After drawing the tattoo with the tattoo machine, your tattoo artist will clean the place of the tattoo thoroughly. Any antibacterial ointment will be used as a protective layer on the tattoo.

Step 3: A thin plastic film is pressed over the pieces of gauze bandage used to wrap the area. Make sure that no place is left empty. If a place is empty, bacteria, viruses, and other infectious diseases can easily attack tattoos. A skilled tattoo artist will set the transparent plastic film very well on top of the new tattoo. The more noticeable thing is that no blood can come out of the covered area at all. Bleeding from a covered area can ruin your clothes and bed, as well as help carry blood-borne diseases for others.

Step 4: Lightly cover the thin plastic film with scotch tape or cloth bandage and press it on the new tattoo. The bound space cannot be tied too tightly. If tied too tightly, the chances of bleeding will increase. The new tattoo should be lightly and gently tied for one day. On the second day after the first day has elapsed, the tattoo wrapped in plastic film should be exposed, and the newly tattoo should be washed with lukewarm water.

How Can You Re-Wrap Tattoos?

In the first stage, the tattoo artist will wrap your new tattoo himself. But then you have to do the tattoo wrapping yourself. How can you wrap your tattoo while sitting at home? Let’s share the matter with you.

To wrap the tattoo in a new way, you must choose the cleanest room in the house, and the room should not accept the presence of anyone but you. Wash your hands for at least 20 seconds with handwashing soap containing at least 60 percent alcohol before wrapping the tattoo anew. Clean every corner of your hand and squeezing your fingers with alcohol so that no germs can attack your new tattoo. Now remove the Saniderm tattoo bandage from the packet and press it on the clean tattoo. Ensure that the adhesive part of the bandage is stuck directly around the tattoo so that it does not sit on the skin of the tattoo. Such tattoo bandages help with the respiratory process so that the bandages can be applied to the new tattoo for up to 24 hours. Be sure to cover the new tattoo with a bandage before going to bed at night. In the same way, for the first few days, you have to tie a bandage on the tattoo. The subject may seem a little difficult on the first day, but you can easily master it later.

How Long Do You Have to Keep Tattoo Wrapping?

We’ve talked about tattoo wrapping in detail and thoroughly for so long. Hopefully, you have been able to understand the subject of tattoo wrapping fully. The tattoo wrapping process is not as difficult as it may seem in reality. With a little effort, you can master the wrapping process well. In this case, of course, you need to have goodwill and strong morale. Here are a few things to remind you again: you must try not to use the thin film of plastic when wrapping. If your tattoo artist is forced to use a transparent plastic film, you must discard the old film every three hours and re-wrap it.

Ideal as a gauze bandage, thin clean cotton cloth, or Saniderm bandage tattoo wrapping. Such bandages are healthy, help with the respiratory process, and are very affordable, so we recommend using such bandages. Such bandages have to be soaked with mild hot water.

When wrapping tattoos, your hands must be disinfected with soap or handwash, or alcohol. Healing ointment should be used as per the advice of the tattoo artist.

Refrain from walking around in the sun and showing tattoos to others unnecessarily. Hopefully, you will comply with all of the above, and if you comply with these compliments, both you and your tattoo will be protected. Thanks, everyone, for reading this long discussion.

Reviewpart.com is a participant in the Amazon.com Services LLC Associates Program, an affiliate advertising program designed to provide a means for sites to earn advertising fees by advertising and linking to Amazon.com.